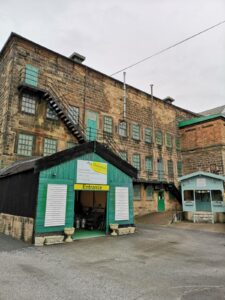 A large 4 storey Victorian Mill, situated in the market town of Belper in the heart of Derbyshire. Forming part of the Derwent Valley World Heritage Site.

We have new stock arriving each and every week, so if you don’t see something on the site today, call back next week to find our our latest arrivals.

We hope you find this site informative and helpful. If there is anything you think we have missed, then please do not hesitate to get in touch with us.

Our mill was originally called Unity Mill (quite an apt name as it now brings together 35  plus local like-minded artisans and antique dealers).  The site that is Unity Mill stands on what was once part of the extensive estate of the manor of Duffield, under Lord of the manor Richard Paul Jodrell.  In 1798 the land, along with a package of property, was sold to a local man Mr William Walker.  As Belper was then an up and coming town, together with the whole of the Derwent Valley, with its industrial heritage being built and acquiring value.  In 1807 Walker’s speculation appeared to pay off when he sold his land to John Whitaker, the proprietor of The Red Lion Inn across the road.  From this point the land was said to be used as stabling for the Red Lion Inn until around 1836 when it was sold to James Webster:  It was he who built our mill.  The Mill was built in two stages:  First, a relatively small building built in 1839 as a steam powered Corn Mill/Bakery.  It was then sold in 1853 to John Strutt (the grandson of Jedidiah Strutt) for £2,500 and extended to the four storey mill that you see today.  He installed 2 x 30HP Beam engines and other machinery at a cost of over £7,000.00.  John Strutt leased the building to John and Humphrey Winsom as a Steam Cornmill.  After the death of John Strutt in 1858, the Mill was inherited by Anthony Strutt (John’s Brother) who sold a majority of shares to George H Strutt (Anthony’s Nephew) and Edward Lord Belper (Anthony’s Cousin).  In 1865 the Mill was again sold to Nickison and Smith: Again to be used as steam Corn Mill.

In September 1866 there was a freak accident at the mill, as reported in the Derby & Chesterfield Reporter …

On Wednesday the 12th a remarkable accident occured at the Unity Steam Flour Mills at Belper which at one time threatened to be attended with loss of life. The owners are having a well sunk on their premises for supplying the engines. The well is about 20 feet in diameter and is lined with a massive wooden frame work which is again lined with cemented brickwork. This framework is constructed of battens several inches thick and it is made into sections, put together at the mouth of the sinkings, and then allowed to sink into its proper depth by its own gravity, assisted by the excavation below.

This excavation was taking place and the workmen were wheeling away the soil from the well. One of the workmen, working close to the wooden framework, felt the earth beneath him give way and he sank several feet ending up being buried and wedged between the soil and the outer casing of the well. He was quickly uncovered but had been buried in a sitting position with a large amount of soil on his legs. The workmen shored the earth around him and tied a rope around his body. An opening was then cut into the well lining to draw the man through. By this time hundreds of people had gathered. The man was fed brandy in large quantities as a stimulant, whilst the rescuers sawed and chiseled their way through the wet wood taking several hours.

A doctor who was later present prescribed a cup of hot tea for the man (may be thinking that would sober him up) as he was becoming rather talkative and failed to realise what a precarious position he was in! The man was eventually rescued through the hole in the well and his fellow workmen gave “two or three Huzzas, which was speedily interpreted by spectators outside to mean victory and they in their turn gave a hearty cheer”.

The man was then brought up and wrapped in warm blankets but he refused assistance for in fact “nothing was amiss with him except a little boisterous of spirits which could be explained by the stimulants he had partaken of.”  It was amazing that he survived let alone having no injuries whatsoever ( except maybe for a very sore head the next morning)!

Unfortunately, in 1872, it was repossessed by the National Provincial Bank who held it for Three years.  The Advert for it’s sale read …

Known as Unity Steam Flour mills and Bakery …..modern plant and machinery…..capable of grinding 700 sacks a week…. ovens will bake 250 sacks a week. The buildings are of recent erection and most substantial

In 1875 it was sold to WM Manlove who was a director of the english sewing company.  He also rented Strutts Belper and Milford Mills at the time.  The mill stayed in his ownership for 27 years and operated as a cotton thread Factory.  In 1905 the Strutt estate and debenture trustees purchased the mill and William Holden Took on the lease. He was a furniture manufacturer and employed around 100 people.  In time he ceased manufacturing at the mill but continued to retail from here until the 1930’s it was closed down.

Information after the 1930’s is a little less specific but Unity Mill was utilised during the second world war by Rolls Royce and designated a ‘planning office’ although we know it also housed the wages office.  It was awarded a grade 2 listing in 1979 and later occupied by a German company Roehms Ltd who made plastic colorants.  In the mid-1990’s Machall Investments Ltd trading as Derwentside Shopping Mill became the custodians by lease and later ownership, and continue to this day.

Stay in touch with us via: